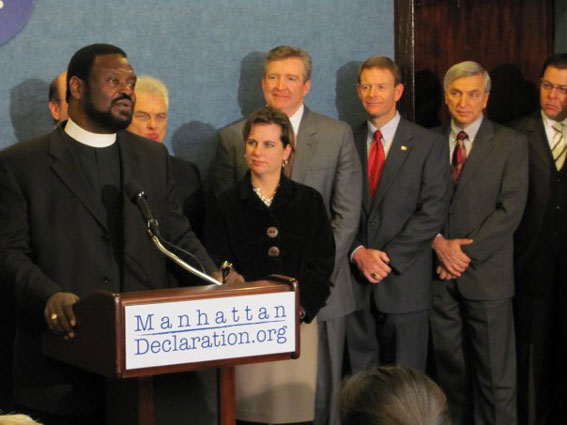 A landmark declaration re-affirming traditional Christian teaching on marriage, abortion, and religious freedom was endorsed by a who’s who of Christian leaders on November 20. As reported by LifeSiteNews, the “Manhattan Declaration”, so named because it was drafted in New York City, was authored by Dr. Robert George, Dr. Timothy George and Chuck Colson, and signed by more than 125 Orthodox, Catholic and evangelical Christian leaders, including Focus on the Family Dr. James Dobson and National Association of Evangelicals president Leith Anderson. Fifteen Roman Catholic bishops, including Archbishop Timothy Dolan of New York and Archbishop Donald Wuerl of Washington, D.C., were among the signatories.

This landmark declaration can be viewed at www.manhattandeclaration.org. Here’s an especially pertinent extract expressing the signatories’ unwavering commitment to defending unborn life:

We will be united and untiring in our efforts to roll back the license to kill that began with the abandonment of the unborn to abortion. We will work, as we have always worked, to bring assistance, comfort, and care to pregnant women in need and to those who have been victimized by abortion, even as we stand resolutely against the corrupt and degrading notion that it can somehow be in the best interests of women to submit to the deliberate killing of their unborn children. Our message is, and ever shall be, that the just, humane, and truly Christian answer to problem pregnancies is for all of us to love and care for mother and child alike.

A truly prophetic Christian witness will insistently call on those who have been entrusted with temporal power to fulfill the first responsibility of government: to protect the weak and vulnerable against violent attack, and to do so with no favoritism, partiality, or discrimination. The Bible enjoins us to defend those who cannot defend themselves, to speak for those who cannot themselves speak. And so we defend and speak for the unborn, the disabled, and the dependent. What the Bible and the light of reason make clear, we must make clear. We must be willing to defend, even at risk and cost to ourselves and our institutions, the lives of our brothers and sisters at every stage of development and in every condition.